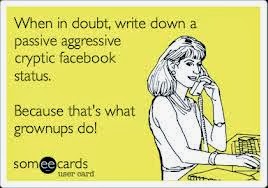 Please allow me to explain... 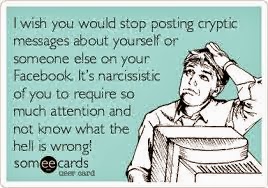 Facebook is a great place to say what you think and, while I don't always agree with what my friends post sometimes, I certainly don't complain about it. After all, if they're posting on their own site, who am I to complain about what they post? If I don't like it, I can just ignore it and move on. No big deal. If my friends "live" on Facebook and the posts get overwhelming, I block it from my newsfeed. I still love my friend, I just need to take their words...in small doses. It's an easy fix. I am not the Facebook police, and I am not a therapist.

If a person posts a cryptic message, and they're good at it, their intended target will pick up on it every time. If it isn't for me, why do I care what the message is? I'm not going to lose any sleep, or any of my time, trying to figure out a message that - obviously - wasn't intended for me anyway. When I see one, I just smile and know that someone - somewhere - is getting the message. Sometimes it's a message they like, other times...maybe not so much - those are the ones you see and go, "Ouch, I don't know who he/she is talking about,...but I'm glad it's not me."

I should mention the kind of cryptic messages that aren't "angry" ones. Sometimes it's a quote from a teacher/coach that only your old high school buddies will understand. It might be a movie quote that just a small group of your friends understand a funny incident that happened at that movie, at that moment, when you were all out together. If you're a teacher, like me, it might be a post that only someone who teaches could ever understand the true meaning. On rare occasions, it might even be a message you would post that only one person remembers a specific moment in time when those words were said or were important to you. See? It's not all anger management/passive-aggressive issues.

So, while I think we all have a right to our opinion, I think people who complain about cryptic messages should quit telling people to "get a life" and get a life of their own. Seriously. Why do they care what the message means? Don't they have something else to focus on? If the person wanted you to know the meaning behind it, you would.

Yes, I do. In fact, I find it fun to play with words and get responses from the people who know exactly what I mean. I also love to post messages with double meanings. I will say, though, that I don't usually post those messages because I'm angry or need to get something off my chest. I do them for fun.  I also don't do it to get attention from other people asking me what I mean. My intended audience always knows what I mean.

You know, it kind of reminds me of an incident in my past (LONG before Facebook)...

Once upon a long time ago, my dad happened to walk in to the same cafe where I sat eating lunch with some coworkers. He knew the owner and workers in the cafe, so he waved and said hello when he came in. Dad came over to our table, and I introduced him to the other ladies. He was courteous to everyone, but after a few minutes he turned to me directly and said something. I don't even remember now what it was, but it was something he was saying to just me, while the other ladies were talking to each other. 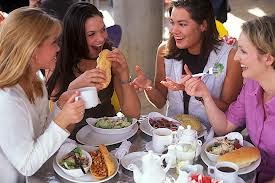 At the end of what he said, one of the ladies happen to catch that he was speaking to me. She looked over at him, almost expectantly, thinking he would repeat what he had said when she wasn't paying attention. She raised her eyebrows to him, as the other ladies finished talking, and everyone looked at the two of us. I noticed it, but my dad was still looking at me. He then turned to face the women at the table as one said, "I'm sorry, I didn't hear what you were saying to her. You were mumbling too low." My dad looked her straight in the eye and said, "I wasn't mumbling, I was speaking to my daughter. If I had wanted you to understand what I was saying, you would have." My dad then smiled, told us all to have a good day, winked at me and walked away.

Now, you could argue that it isn't the same thing, but I think it is. Other people could see my dad and hear my dad, they just didn't know what he was saying to me. The "messages" he gave when he walked in the cafe varied: one was for a large group (the cafe crowd he knew), one was for a smaller group (the ladies at my table), and one was for just me. We were all in a public place together, but each "message" was intended for different people.

So, here's my advice for people who complain about cryptic messages...

Next time you see a cryptic message that you don't get, just leave well enough alone. If the writer wanted you to understand it, you would have. If you have a passive-aggressive friend who uses cryptic messages to get attention and it gets on your nerves, block them from your newsfeed.

Maybe you should get some friends who are a little more mentally and emotionally balanced. Find some people who are intelligent and well-read enough to know how to play with words and have fun with them or who understand all the same references to novels, movies, and song lyrics. If you do that, you can all join in on the fun! ;)

And, now, it's only fitting I leave you with a cryptic message of my own...

"There's no word like the name that I call you."

Posted by bornbibliophile at 11:00 AM