A New Genre in Books?

I've always said I'm not a book snob, but I must admit there are some books that just aren't my cup of tea. I don't think that's being a snob, though, I just think we all like something different. Keeping in mind this book wasn't really my genre, I will try to give a fair and impartial review. 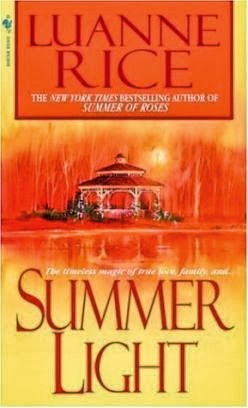 I read Luanne Rice's book Summer Light because one of my friends chose it for book club. She purposely chose an easy read because she had read it over the summer. She also said she liked it because it is set in several places that she was able to travel to on vacation. There is also good descriptions of the great outdoors in the book, and my friend loves nature and being outdoors.

As for me, well, it was something easy to read to help change the channel in my head from thinking about work too much. The story wasn't believable at all, but that's OK. You know the type, woman with a small child who has never been married herself - never could find the right man...and the jerk who is the absent father was, of course, married to someone else at the time of their affair and she didn't know it,...of course. Well, this single mom owns a successful wedding planner business (complete with old country house and adorable barn) and one day finds herself on an airplane taking her child to a psychologist and, wouldn't you know it, there just happens to be a professional hockey team on the plane. The woman's daughter is drawn to one of the hockey players and says there is an angel flying around his head. She also believes the man is supposed to be her new daddy. (Now you know why the child is on her way to the psychologist.)

Long story short, the child predicts the plane will crash, tells the man to please save her and her mommy when that happens. The plane has to crash land, and hockey-man heroically scoops up the woman and her child and saves the day! Ah, and another love story begins...

Now, I don't have to tell you they end up together - you know they do. In fact, you know it in the first few pages. I'm not giving anything away. You learn a great deal in the first chapter, which makes me ask...why write the story? There were no surprises, you know how it's going to end at the beginning. Is it fun to go through the details of their relationship and read about them making the same stupid mistakes all the rest of us make - except they get to do it with lots of money, three homes, and a sports car? No, not particularly,...but it was something to read instead of focusing on work. It was a brain vacation.

Remember when I said I wasn't a book snob? Well, honestly, I'm not. I do, however, have a new genre code for books I know I don't want to read. I call it the "Lifetime Movie Network Genre." In other words, if the author has had one of their novels made into a movie for LMN, it is definitely not my kind of book. As you might guess, I am not a fan of LMN.  I actually checked on the author after I read the book. Luanne Rice? Yep, she's a Lifetime Movie Network gal. Not my genre.

If it IS your type of genre, perhaps this author's books are for you...or maybe the mini-series version?

As for me? I'm currently almost halfway through a pretty decent middle school novel about a present-day teenage girl who comes across an old ghost in a cemetery in New Orleans. It seems there was a murder back in the 1800s and, because it was unsolved, the ghost can't find peace. It was a slow start, but it's getting to the good part now. I can't wait to find out what happens next! See y'all later...

Posted by bornbibliophile at 8:35 PM