One Book Leads to Another

I've been in a bit of a reading funk lately. I'm reading, but I haven't found anything amazing in a good while. However, I am in the habit of allowing one book to lead me to another,...especially when I'm at a loss about which book on my TBR I want to read next.

I can sum up the book, without giving anything away: an older woman, Marianne, realizes her entire marriage has been a sham and just walks away from her life while on a vacation trip with her husband. She would rather kill herself, jumping off the wall into the Seine, than stay in her life for one more breath.

Marianne fails in her attempt to commit suicide, but embarks on a journey that will help her find herself. Yes, I know, it's a bit cliché. And, yes, it's a bit predictable. But, I will admit, I enjoyed the characters. It was fun to visit with them for awhile. The book also made me curious about Brittany and people who are Bretons. And, of course, I always enjoy the European take on things. 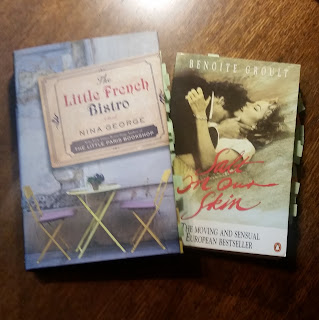 I also found myself interested in a book Marianne refers to in the novel. She mentioned a book about a Parisian intellect and a Breton fisherman that had a long-term love affair. She mentions it because she's on the same beach mentioned in that novel. From the sound of it, the book was fairly well-known. I decided to look it up and found it is a book and a movie. Who knew? So, I ordered a copy of the book Salt On Our Skin by Benoite Groult.

First, let me say, I'm glad I read Groult's novel. I certainly learned a few things, insights into my own way of thinking, but I can't say I especially liked it at first. Perhaps, it's because I didn't like the main character and narrator of the story, George (a woman). I suspect she didn't like herself too much either. I respected her for the truths she tells, and how boldly - at times - she tells it,...but you'd expect a woman to gain wisdom as she ages. Or, at least, you'd hope she would. I found George to be very self-centered and shallow...and too intellectual for her own good.

Gavin (her lover), on the other hand, I found very likeable...in a bumbling, honest-guy kind of way. Any sympathy I had, I gave to him. Poor bloke. The Parisian intellect wants to play head games, while the Breton fisherman just wants to earn an honest day's pay and have someone to love him for who he is. It sounds like it's doomed from the start, doesn't it? I must say, it is refreshing to have the woman be the 'bad' one in a relationship instead of the man.

Then, I began to think about why the book was written in the way it was written. The narrator had an honest voice. Too honest, I think, sometimes...

I decided to look up the author later...and found her life was very similar to the narrator's. Very similar. I believe that was intentional. In fact, after researching about Groult's life, I understood why the picture she painted in the novel shows the woman as almost self-loathing. To understand the author is to understand George, who is very critical of the choices she's made, but lays no blame at the feet of the Breton lover she clings to passionately. She even tries to forgive herself for the bad decisions she made based on what she understood of life at that time. Looking back, it's easy to see what you should've done, or could've done. After all, hindsight is 20/20, right?

I can already tell this is one of those novels that will stay with me for awhile. And I have a feeling the more time that passes, the more fondly I will think of it. Much like an old lover.

Posted by bornbibliophile at 7:49 PM