Catching Up with Books

I've been reading a variety of books lately, so I thought I'd break them down into age groups. If you're not interested in middle school novels, skip to high school (because that is also an excellent adult read) and adult fiction areas below. 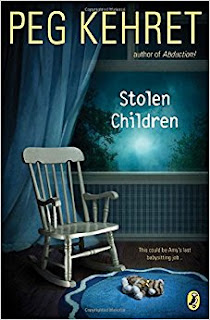 First, I'd like to recommend Peg Kehret as a writer. I'm known to preach the merits of her books because they do well with the middle school crowd. Kehret is good at pulling readers into the action and shocking them pretty early on. I haven't read some of hers in awhile, so I decided to read Stolen Children. I wasn't disappointed. In fact, I was able to convince some other students to read it by simply reading the first two lines:

"Amy's babysitting course taught her basic first aid, bedtime tips, and how to change a diaper, but it did not cover what to do if two thugs with a gun showed up. She had to figure that out herself."

And if you think that's the only shocking thing in the book, it's obvious you've never read Peg Kehret. This writer knows how to hook a reader! This isn't a long novel, 165 pages with fairly large print, but it IS a good book. I'd recommend it for sixth graders and for reluctant seventh and eighth grade readers. 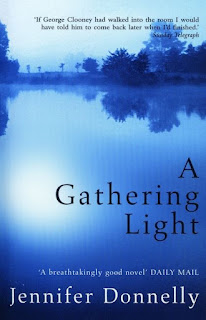 Jennifer Donnelly is another great author I love. I admit, though, she broke my heart when she agreed to write a series of books for Disney,...just so they could sell more products. Perhaps, that's why I decided to go back in time to one of her older novels I'd never read.

I chose to read A Gathering Light (titled A Northern Light in the U.S.) because it was from a time and place I knew nothing about. The setting is the early 1900's in the Adirondack Mountains. The story is a historical fiction at its finest and revolves around the real murder of a young lady staying at a hotel on holiday. Donnelly writes the story from the perspective of a mountain girl, Mattie, who works as a servant in the hotel. Mattie had served the young woman the night before her murder, when the woman gave Mattie some letters to burn. Once the hotel guest is found dead the next morning, Mattie doesn't know what she should do with the letters: Keep her promise and burn them? Read them and look for clues? Turn them over to the constable? 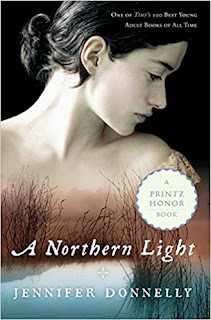 This book is definitely a page turner that begins with the gruesome scene of the dead girl and goes back in time as Mattie tells the reader what took place before. The book does an excellent job of portraying life for the people of that area during that time. Mattie is a likable character, wise beyond her years, and with more responsibilities than a young girl should have to be burdened with. There are many layers to this story, and all of them are intriguing.

I found a fascinating book titled Serena, by Ron Rash, at our library's book sale. I was attracted to the novel because the setting was the 1930s in North Carolina. I was born and raised in North Carolina, but I know nothing of what life was like there in the 1930s. I found out, after I read the book, Serena is also a movie (which I haven't seen yet).

There are many things I like about this novel, but I'd have to say I most enjoyed hating the villain. There's nothing quite like the pleasure of finding a character you can completely loathe. Too often, villains are given an excuse for being evil. Not this time. 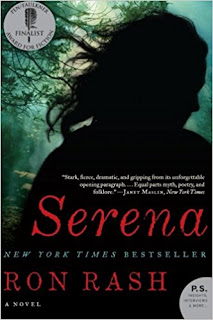 The novel centers around a Boston business man, George Pemberton, who owns a logging company in the NC Mountains. Labor is cheap, conditions are harsh, and he's a jerk. George meets his match in his new bride, Serena, and he brings her back to the NC Mountains to help him run his business. The two share quite a passion, both physically and in a type of bloodlust for violence and hunting. It's almost like she's the female version of her husband, a perfect reflection of his own ego. And isn't that every man's dream? Perhaps.

I didn't like that Rash's book was compared, in reviews, to Steinbeck. I almost didn't read it because of that. I'm not a big fan of Steinbeck, though some of his novels are okay. If I had to compare this type of novel to anyone, it would be Daphne du Maurier. It is definitely, what I would consider, a gothic tale of intrigue and suspense.

My advice on this one? Don't read any spoilers, don't watch the movie,...just...read it. If you like good twists and evil villains and violence of varying degrees, this book fits the bill. I soaked it up in a day. It's very rare I get an entire day to read a book, but this one insisted on it.

Next, in my TBR stack was a debut novel... 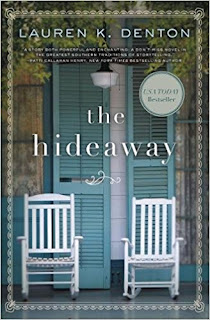 The Hideaway by Lauren K. Denton was an easy, uncomplicated novel with a host of loveable characters. Sara lives in New Orleans, away from her eccentric grandmother, Mags. When Mags dies unexpectedly one day, Sara finds that she's inherited her grandmother's old, rundown bed-and-breakfast. Sara has been left specific instructions on what to do with the property before she decides to sell it or not. Sara finds many things at the old bed-and-breakfast, but she never expected to find...that she never actually knew her own grandmother.

This is a delightful read, but...it pretty much reads like a Lifetime Movie Network movie. I'm not saying that's a bad thing, I'm just letting you know it fits in that category for me. I'm glad I read it, I always like to give debut novels a shot, but it's not my type of genre. It fits in more with readers who enjoy Nora Roberts.

I'm enjoying a lovely autumn day today, as I read A Gentleman in Moscow by Amor Towles. I started the novel a couple of days ago. I'll let you know my review on it next week. 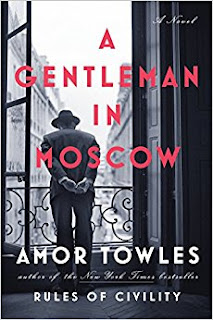 Posted by bornbibliophile at 11:31 AM