I read a beautiful book about monsters.

Before I read it, I knew nothing about it except that I had seen a couple of middle school students reading it, and I knew my youngest daughter (she's 23 years old) didn't like it. She was visiting and saw I'd purchased it. She disliked it so much that she said I could also have her copy if I wanted it. (And I do want it, Cynthia!)

I read the book A Monster Calls, by Patrick Ness, in one day and absorbed every part of it. I marked beautiful, meaningful passages that spoke to my heart. I also read it through two lenses. One lens was my own, having a deeper understanding and connection to the things in the story, and the other lens was that of a sixth grade student. Because of my daughter's comment, I wanted to make sure this was something I thought a sixth grader could handle. (And it is. It most definitely is.)

While the story is steeped in fantasy, it is a very true story about human emotions, difficult struggles, and how humans handle how we feel. In the case of this story, it's a boy named Conor dealing with the fact his mother is fighting cancer and his father deserted them long before that. I'm not giving anything away by saying that, the reader knows it within the first few pages, but the book isn't about cancer. It's about how a boy handles the emotions that go along with the changes in his life.

When a child knows at a young age he has no right to be a normal kid because he already realizes there are much bigger issues than his own, it changes his childhood. He grows up very quickly, whether he wants to or not. It is not easy waters to navigate. Some children handle it well, others do not. Like so many children, Conor finds himself forced to be a little adult. He's doing the things his dad would do and trying to help take care of his mom. Everyone is concerned how Conor is handling everything, but no one knows the right things to say. And, then?

Through a series of dreams/nightmares the monster tries to help Conor face his greatest fear. When the monster is unsuccessful, at first, he decides to approach Conor by telling the boy three stories over several nights. And the monster tells Conor that when the third story is told, Conor must tell the monster his own story. Conor must be the author of the fourth story and tell his truth.


"Stories are the wildest things of all, the monster rumbled. Stories chase and bite and hunt."

This is as close to a perfect story as I've ever experienced. And, yes, it is perfect for young people...and for grown-ups. 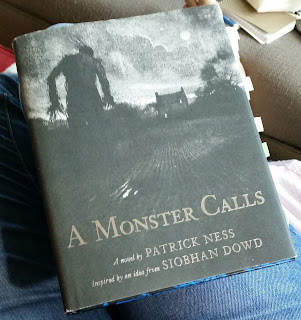 In a young adult fiction world, where there are few contemporary books with any substance to them, this book is a rare treat. The story is woven in just the right way. It's the kind of book C.S. Lewis described as a book that is worthy of childhood and adulthood - which is the only kind of book that is truly a good children's book. Period.

Read it. You won't regret it.

As for my daughter's review? I guess I could sum it up as a review I saw on Goodreads when I was finished: "I hated this book. It's an important book." And the reviewer gave it five stars.

You see, even grown-ups struggle with expressing emotions or reading stories that cause them to feel things they'd rather avoid.

Posted by bornbibliophile at 8:47 AM