Death is a Cheat

I was browsing my own bookshelves for a good "in between" read the other day, and I just couldn't decide what I wanted. More than once, my eyes glanced at a book by Anita Shreve. More than once, I shook my head and moved on. There's a reason for this. It's the same reason I don't read Jodi Picoult books. Can you guess? Surely the title of this post is a big hint.

Now, I'm not one who is given to hasty judgments, and I usually give an author more than one chance to prove themselves if I find redeeming qualities in their writing. I can honestly say, Anita Shreve can turn a lovely phrase and some of her description so adequately describe the human condition that I find I use a few post-it notes marking passages. The thing is, it takes more than that to make a great novel.

I had read Shreve's novel Where or When some time ago. I had heard so much about the author from other people that I actually bought two at one time. After reading the first, I put the other on my shelf and forgot about it. The first one really made me mad, as I felt the author had woven a good story and then needed to tie up loose ends quickly, so she killed off the main character. Really? Really.

So, before I give this book review, let me just say this...

Authors who consistently use death as an easy out in their stories really piss me off. Truly. Allow me to elaborate...and to prove why "piss me off" is such a perfect way to express the emotion I feel at a writer's flagrant use of one of life's harshest realities.

Life is hard and most of us have to work through it, whether we always feel like it or not. Death is not a resolution. Any writer can use death as an easy way out for a character in a story. It also leaves the reader feeling quite cheated. Not necessarily because the reader has all this emotion and attachment to the character (because, trust me, I didn't), but because the world simply doesn't work that way. Most people do not find themselves in the middle of turmoil, at a major climax in the story of their own life, to find that someone has died. If they do, they certainly don't see it as the turning point to their problem, or that it gives them any resolution at all. In fact, it begins an entirely different line of suffering.

The author, by the way, doesn't feel the need to elaborate on all that suffering after the death. No reason to go into all the details of what happens with all the other characters after the unexpected death. Nope. They can wrap all of that up in one last chapter. Their job is done. You see, the author has filled up the number of pages required to meet their contract or to make their publisher happy, and the reader is left dissatisfied. What may have started out as a great story, just fizzled before your eyes and has left unresolved issues flapping in the wind or the resolution is so weak, it doesn't hold water. 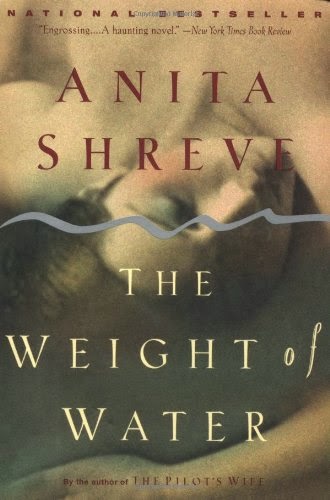 I decided to give Shreve another chance and read The Weight of Water. Great title, yes? I thought so. I was so excited when I read the introduction and even found a quote I liked on the second page!


"Sometimes I think that if it were possible to tell a story often enough to make the hurt ease up, to make the words slide down my arms and away from me like water, I would tell that story a thousand times."

Oooh, I thought, this is going to be good!

The premise of the novel is that a photographer is on assignment to capture the essence of an island where horrible murders took place back in the the late 1800s. The novel carries two stories. One is the story of the murders and the other is the story of the photographer and her husband, who are on a boat with her brother-in-law and his girlfriend. Jean, the photographer, and her poet husband, Thomas, have been married for fifteen years and have a daughter together. As the research and story go on about the murders of the past, Jean finds herself becoming suspicious and jealous of the other woman on the boat.

I realize that the 'link' between the two stories, past and present, is one that questions what happens when a woman is 'pushed to the edge.' The author says as much on the back of the book. I also know that there is death in the book before I read it because the murders of the past are actually a reality, which is what made the book interesting. I enjoyed the story about the real murders from the 1800s much more than the present-day characters on the boat. Quite honestly, I didn't care about the characters on the boat. They were just too one-dimensional.

I guess I'm glad I read the book for two reasons.

First, it piqued my curiosity about the murders on Smuttynose Island, which I researched after I finished the book. While I didn't appreciate the way the author ended the story of the present-day characters, I did like the way she gave her own ending to the real life drama of two women who were murdered on the island.

Second, I can now say I gave the author a second chance, and she proved to me why I don't care to read anymore of her books. While I'm sure this will, in no way, make her sales drop drastically or make her improve her writing, I am content to know I won't waste anymore of my reading time on her books. Also, I guess it's some consolation that the book was a quick read (less than 300 pages).

If you're going to read the book, don't read about the real murders first. The book will seem more interesting if you read about them after you finish the novel. Actually, you could just skip the book and read about the murders online. You could get creative and write your own story around it. I'm sure you could come up with a better ending than Shreve.

(I had no idea, until just now, that this was made into a movie in 2000. For once, I'm going to say...watch the movie. Maybe, it's actually better than the book.)

Posted by bornbibliophile at 6:49 AM