Wow! I mean, really,...WOW! Have you ever finished a novel and been completely worn out from the intrigue of it all?! I just finished City of Women by David R. Gillham, and I find it hard to believe this is his debut novel! (Should I insert another "wow" here?)

First, let me say, this book was a random pick for me. I have plenty of books at home I could choose from (ummm, don't we all??), but I was at Sam's Club the other day getting groceries annnnnnnd...just happen to cruise by the book section. Innocent enough, right? I wasn't really attracted by the cover, which is what usually pulls me in, but I was attracted by a combination of three things on the front: the top portion quoted a reviewer saying, "If you're a fan of well-written historical novels..." (Ding!), the title was City of Women (Ding!), and the author was a man (Ding! Ladies and gentlemen, we may have a winner!). Now, those three things separately don't mean anything, but together? Together they mean I'm interested enough to pick it up and read the back, the reviews, and the first page or two...or three.

I liked what I saw in my preview of the book, and it sealed the deal for me when the reviews mentioned it was the author's debut novel. I like giving newbies a chance. It's good karma, so to speak. I don't actually read about the authors when I choose the books. I don't want to know about them until I read their novel. I guess you could say I like to focus on just the story and save any "ah-ha" moments about the authors for later. I do tend to research many things, especially with historical fiction, after I read a good book. 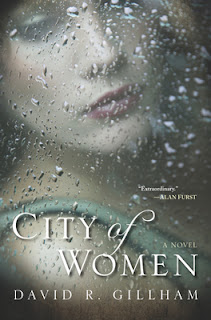 As you know, I will not give the plot away - no spoilers here! I will say, though, for my friends who read the last few pages of a book first (you know who you are), do not do that with this one! It's a rare find when a book has so many twists and turns I don't figure out how it's going to end halfway through. This book is worth the wait to follow all the characters through to the end. They are also the kind of characters you will think about long after you've finished the novel.

If you're interested, you can always preview a bit of the book online. I don't like to do that, though, because there are too many spoilers. It's like watching a movie trailer that no longer requires you see the movie to know the entire plot and, usually, shows the only funny parts. I will, instead, quote what the author, David R. Gillham, writes in the back of the book about why he wrote it. Hopefully, that - along with my recommendation - will whet your appetite if historical fictions are a genre you enjoy!

"This book came about from my desire to write about history and about ordinary people thrust into extraordinary circumstances.
I have always been captivated by history. Not just its broad sweep, but also its intimate corners, where the shadows gather. And Berlin, during the Second World War, was a city defined by its shadows. It provided the perfect setting for people making difficult decisions in their daily lives that could reshape their future in a heartbeat."

I will tell you it isn't a "pretty" story. Stories about war never are. It is one of those books that I find myself telling someone, "It's a good book, but it is not a pleasant subject." If you are a fan of books like The Boy in the Stripped Pajamas or The Kite Runner, you know what I mean. This novel, like those, makes you think and ask yourself, "If I were in those circumstances, what would I do? What would any of us do?" Good food for thought,...and it's important to feed your brain!

For those of you who are curious about why those three combinations were "a winner" in this case? It is because the front cover looked too much like a romance novel, which is not (I repeat, not) my kind of novel. I don't have anything against them, of course. I am also not ashamed to admit that I've read a few and enjoyed them for what they were. It's just that summer is valuable reading time for me, and I only read romance novels when I'm looking to waste my time. You know, like watching old reruns of some lame show you didn't really like the first time you saw it, but you're watching it again because you don't feel much like thinking - and, who knows, it might give you a laugh or two - so you sit down with a bag of chips, a can of soda, and zone out. Yes, like that.

So, before anyone sends me hate emails about "the author was a man" part of my statement, please know I love women authors! I stated it was the combination that was important. In other words, if I had seen the cover picture, the title, and a woman's name as the author, I would have assumed it was a romance novel and probably wouldn't have even given it a second glance. I'm just being honest. You do want me to be honest, don't you? I mean, if you're looking for a faerie tale, you're in the wrong aisle of the bookstore right now. ;)