(Let's see, where did we leave off yesterday? Oh, yes, I had read and enjoyed Loving Frank by Nancy Horan, and Kindle suggested another great book to me! Of course, at this point, I was unaware I was actually ON a reading trail.)

The Paris Wife, by Paula McLain, was the next book Kindle put in my path. It is the story of Ernest Hemingway's first wife, Hadley Richardson (Hemingway was married four times). The story is told from Hadley's point-of-view, and it is an incredible story. Their married years together took place in Paris in the 1920s when Hemingway was a struggling writer. The setting itself gives their story a very surreal feeling. The adventures they had, and the people they knew, were amazing. What is most amazing to me, though, is how wonderful their ordinary day-to-day life together was.

I know the author did her homework on this one. I have seen several of her interviews, and I have looked into many of her sources. I feel McLain gives Hadley the voice she deserved. And, after reading Hemingway's own words about his first wife (words he wrote while married to his fourth wife, I might add), I'd say it was the voice he would have wanted Hadley to have and felt she deserved, as well.

I once heard Paula McLain say that when she started the journey to write Hadley's story, she thought she would end up hating Hemingway - something she really didn't want to do. I have to admit, I was worried about the same thing. Once she had poured over all the history and the letters and the writings, McLain ended up loving him instead - just as I did. Just as Hadley did:

"...and I knew that I could hate him all I wanted for the way he was hurting me, but I couldn't ever stop loving him, absolutely, for what he was." ~ The Paris Wife 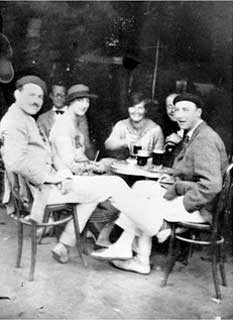 It was because of The Paris Wife that I began my own research into Hemingway, his life, and his writings. Kindle suggested that I read Hemingway's The Moveable Feast next. I knew I wasn't ready. My heart wasn't ready. I was not prepared to see the last words Hemingway wrote about his life. What I was prepared to do, however, was to notice the trail I had begun,...and I made the choice to take a deeper path into the woods of Hemingway's life.

While I was trying to decide what book of Hemingway's to read first, a friend of mine asked if I'd ever read The Sun Also Rises. It was a book that was written when Hemingway was married to Hadley and was written about in The Paris Wife. I decided that book was a good place to start in getting to know more about the famous author.

I headed to the bookstore this time. I just couldn't download Hemingway to my Kindle. It just felt wrong,...and I convinced myself it would make him roll over in his grave.
Posted by bornbibliophile at 5:55 PM