Stealing from the Poor to Give to the Rich

From now on, I will get a shiver down my spine whenever I hear the name Georgia Tann. I put her in the same category as Charles Manson and Adolf Hitler. I didn't know who she was until I read the historical fiction book Before We Were Yours by Lisa Wingate. Now, it's a name I will never forget. 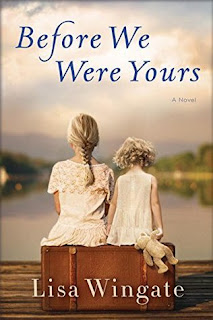 Before We Were Yours is a powerful book that tells the story of families who were forever changed by Georgia Tann and the Tennessee Children's Home Society, which consisted of a network of people who stole children from poor families and sold them to rich people. Not only that, many children died from abuse and cruelty of every kind while under the "care" of Georgia Tann and her minions. Georgia Tann was a serial killer, a kidnapper, a human trafficker, and a child abuser...before those types of labels were commonly heard in the United States.


The novel is set in two different timelines by two narrators. One narrator, 30 year old Avery, is a successful lawyer from a powerful political family in present day. While visiting a nursing home one day, for a press opportunity, she encounters an older woman named May...which leads Avery down a path she was unprepared for. Rill is the other narrator in this novel, a young girl from the past who lives in a shanty boat on the river with her family in the 1930s. It is from Rill's narrative that the reader learns about how children are stolen from their families. Wingate weaves an excellent story that includes the joy of family, the sorrow of a difficult past, and learning to come to terms with how life turns out. Rill's story is one of survival.

This historical fiction novel gave me a glimpse into an area of America's past I was unaware of before (which is why I love historical fiction). I had heard tales of movie stars adopting babies (I clearly remember the story of "Mommy Dearest" from Joan Crawford's adopted daughter), but I never would have thought the adopted children were stolen from other families - poor families.

And poor families are something I understand.

I have a deep connection to my extended family on my paternal grandmother's side. In fact, my grandmother's niece still owns, and lives on, the plot of land my great-grandparents owned during the Great Depression. I've heard tales of people walking the dirt roads in search of work back then, some of them approaching my great-grandmother as she labored in the yard over laundry. She never turned anyone away. She didn't have much, but she had a well. And she would always say to people walking by on that dusty road, "We don't have much, but we have plenty of water and welcome for anyone who needs it."

My great-grandparents, like so many farmers back then, had little to nothing...and had many children. I can't imagine someone thinking them "unfit" because they were poor and taking their children from them or stealing them off the front porch when no one was looking. I can't even begin to imagine what this kind of tragedy would do to a family, the grief everyone would suffer. I just can't imagine.

My own mother is the ninth of ten children that survived to adulthood. My maternal grandmother had another child that died from dysentery before he was two. I wonder how Georgia Tann would have viewed my grandparents and all their children living in a two bedroom house with more dirt in the yard than grass, and siblings sleeping head-to-toe to fit in one bed. When I think of how close all of my aunts and uncles have always felt to one another, I can't imagine someone taking them as children, and separating them, simply because they were poor.

I hope there's a special place, in the hottest part of hell, for Georgia Tann. May she burn forever.

Posted by bornbibliophile at 1:22 PM