Andres, Will, and Me

Once upon a time, I had a student named Andres. Andres didn't like to read very much when he was in the sixth grade, but there was one series he loved: The Ranger's Apprentice by John Flanagan. Because I was curious about a boy who loved a series of books, when he claimed he didn't like to read, I decided to read the first one when he asked me to. And, boy, was I glad I did. 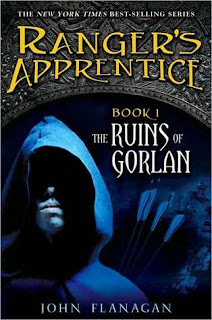 That was over six years ago. Andres has already graduated from high school (which is why I can actually write his real name), the book series has grown since then...and, yes, I've read them all. While Andres is the reason I read the first book in the series, The Ruins of Gorlan, I read all the rest because they are excellent books. I hesitate to say "excellent middle school books" because I believe they are more than that. I assure you I enjoy the series just as much, if not more, than any middle school student. I highly recommend it every year to my students and keep several copies of the first three books in my classroom.

I have a new student this year, let's call him Will (also the name of the beloved main character in The Ranger's Apprentice series). Will entered my classroom on the first day of school with a smile on his face and kindness in his eyes. He is a thoughtful and caring young man, and he impressed me within the first few days when he took my recommendation about The Ranger's Apprentice to heart. He asked if he could borrow the first one off of my book cart. I said yes, without hesitation, and hoped he would enjoy it as much as I did.

We just finished our third week in school, and Will has already finished the third book in the series and has moved on to the fourth, as of Friday afternoon. He loves the series, which pleases me greatly, and it's such fun to talk with him about it. He approached me on Friday, at the end of school, and said he had a recommendation for me. Will said he just knew I'd like The Five Kingdoms series by Brandon Mull. He asked me to please try it. 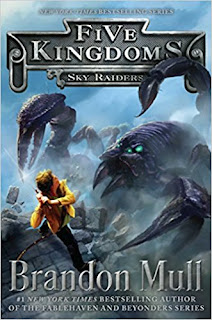 As you know, if you've read my last two posts, I've been having a bit of a dry spell when it comes to my reading choices. I felt like I should take Will's recommendation to heart since he had taken mine. I told him I would try it when I got the chance.

Needless to say, I began reading The Five Kingdoms Book One, Sky Raiders, this weekend. I really like it! I would've finished it, too, but it's been a busy weekend for me. I'm mentioning it now, before I've finished it, because it would be a great book to begin reading at this time of year.

The book begins on Halloween, when Cole (the main character) is at school and everyone wants to go check out this scary, haunted house attraction in the neighborhood for Halloween night. It's a really great beginning, even a bit dark, but so good - such a good, creepy set up to take the reader into another world. I love it! I'm not giving anything away by saying that Cole's friends are in trouble, and he's going to have to figure out a way to save them. There's action, adventure, and daring rescue attempts! Good stuff!

I'll let you know next week if I'm satisfied with the ending, or if each book is a cliffhanger to the next book. At this point, I have no idea,...and I like it that way.

"Since it is so likely that children will meet cruel enemies, let them at least have heard of brave knights and heroic courage."
~ C.S. Lewis

Posted by bornbibliophile at 11:22 PM