This will be a brief post, as it's Mother's Day here in the United States, and it's a beautiful day outside! I am anxious to start my day by enjoying my lovely patio and getting a little reading done.

I have two books for you this week. One is a debut novel by a new author and the other is another book by an author who feels like...family. 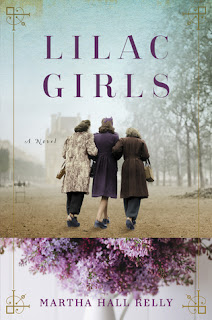 Lilac Girls, by Martha Hall Kelly, is a great book to read if you're a fan of historical fiction set in World War II. Kelly stayed as close to the real, actual events as possible, using her research to guide her story. The novel is special because it is told from three people's very different perspectives. Caroline is a New York socialite who works at the French consulate, Kasia is a Polish teenager taken captive by the Nazis, and Herta is a German doctor determined to make her mark in the male-dominated Nazi regime.

This book was chosen by the new book club I joined. When we met to discuss it this past week, the consensus was the same: we all enjoyed the book and none of us had ever read a novel that gave a voice to a German doctor from World War II. We agreed that all three narrators were good ones and gave us a lot to consider we had not thought of before. One of the ladies in my book club is Polish, and she said she learned things she did not know before about the Polish people in World War II. It was an interesting and absorbing novel. I read it in three days. 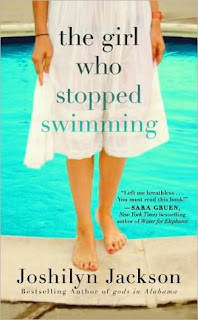 My love for Joshilyn Jackson continues, as I just finished The Girl Who Stopped Swimming. She is, as I have described before, amazingly talented at pinpointing how some older Southern women act, talk, think, and...have a tendency to not want the world to see their reality (and, too often, they don't even see it themselves). For them, it's all about what it looks like on the outside and not what it truly is on the inside.

This novel surrounds a tragedy, how people react to it, and the truths hidden behind the facade of a nice neighborhood. Because of the tragedy, the main character, Laurel, is forced to analyze her own life a little closer. She struggles with something terrible in her own past, as she tries to deal with something terrible in her present. The action builds as Laurel tries to find answers to both before she loses her mind. She is haunted in many ways and must find her own way through a reality that others deny.

I have to say, I was surprised to find some people didn't like it on Goodreads. I looked at reviews  after I posted mine. I found myself wondering if they read the same book I did. I guess we all connect to books in different ways, and I definitely connected with this one. Maybe you have to acknowledge the superficial level many people live on to appreciate a story that reveals the possibilities of what may be underneath it all and seeks to answer why they choose to live that way. I think Jackson did an excellent job at that. She always does. Like I've said before, I'm pretty sure we must be related somehow.


That's all for this week! I hope you all enjoy your Sunday!

Posted by bornbibliophile at 10:19 AM