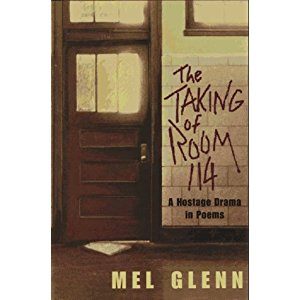 Last week, I became fascinated with a "drama in poetry" book by Mel Glenn. The title of the book is The Taking of Room 114. A friend of mine, and fellow teacher, came across it in a used bookshop and thought she might find something in it to share for our poetry study at school. After she read it, she knew the content was definitely not for sixth graders. It was geared more towards high school students. Still, she was kind enough to share it with me and thought I'd find it interesting. And I did.

The Taking of Room 114 is a about a history teacher who takes his class hostage one day. Each poem is a different perspective from different people, primarily from students. Every student has their own tale to tell about their own lives before the actual incident takes place. Glenn does an incredible job of saying so much in just a few lines of poetry. The reader completely understands the situation. I found it fascinating that it was a satisfying tale. I liked it enough to seek out a copy of my own and look into what else Glenn has written.

Mel Glenn has written several "poetry dramas," and I've read two, so far, and have another on my TBR shelf. These books are not recent releases (published in the late 1990s). In fact, when I decided I wanted my own copy of The Taking of Room 114, I had to search online for it and purchase a good, used copy from a third party seller through Amazon. 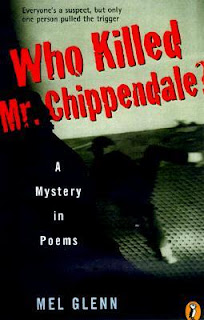 My search also brought me to his award-winning poetic drama, Who Killed Mr. Chippendale?: A Mystery in Poems, which I really enjoyed. A high school teacher is shot on the high school track, early one morning before school, and no one knows who killed him or why. Again, you hear from different characters through poetry. The cast of characters include students, faculty, the police, and a guidance counselor. It really is quite good, and my favorite of the two! (And much easier to get your hands on.)

This type of poetry is a shorthand of prose. I think it's much more difficult to convey a message with a few lines than to write pages of descriptions. I didn't expect to like Glenn's style as much as I do. So, if you're looking for something a little different, but well-written, I definitely recommend Glenn's Who Killed Mr. Chippendale?: A Mystery in Poems for a tasty literary snack. 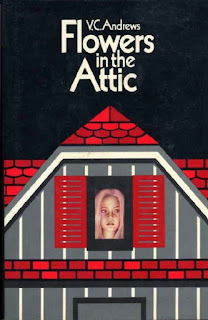 Speaking of 'oldies', I just finished reading Flowers in the Attic, by V.C. Andrews, published in 1979. I found a copy of it at a library sale, and I had heard several of my book club friends express how they loved it as teenagers. Now, mind you, they didn't say it like it was a great book. These grown, college-educated women would giggle when they mentioned it and talk of how they used to hide it from their parents and read it. I knew the premise was about children being locked in an attic, but I had no idea what was in store for me when I read this novel. Or why a teenager would feel the need to hide it from their parents. But I found out.

Flowers in the Attic is a horrible and completely fascinating story about four children who are locked in their grandmother's upstairs room and attic, while their mother tries to find her way back into her very rich father's good graces. He doesn't know she has four children, and he wouldn't approve, so the children are hidden away in an unused bedroom on an isolated wing of the father's mansion. Only the mother and grandmother know the children exist in the house.

Seldom have I read a book where I was so mortified and intrigued at the same time. The grandmother is pure evil, hiding behind the guise of a devout, pious, religious woman. (Religious zealot would be an understatement.) She controls the children by telling them God sees everything they do, and He punishes those who disobey. There are even paintings depicting hell and demons in the room, to remind the children to be good. And all this? Is the very least of it.

While I could not put the book down, and devoured it in a couple of days, I don't think I'll read the rest in the series. I considered it, but find that the ending of the first book satisfies me enough to let it go. It was a bit heart wrenching to get through the first one, and I'd rather leave it at that. I'm glad I read it,...I think. I mean, it's written well,...but the content isn't something I'll be able to forget anytime soon.

After I read the novel, I read online that Andrews once said she wanted her books to be fast reads, something you couldn't put down. Well, it certainly was that.

Now, I want to bathe my reading brain in something light and airy and happy. Let's see what I can find on my TBR shelf that suits me...

Posted by bornbibliophile at 7:27 PM

Email ThisBlogThis!Share to TwitterShare to FacebookShare to Pinterest
Labels: Dollanganger series, Flowers in the Attic, gothic, Mel Glenn, poetry, The Taking of Room 114, V.C. Andrews, Who Killed Mr. Chippendale?: A Mystery in Poems