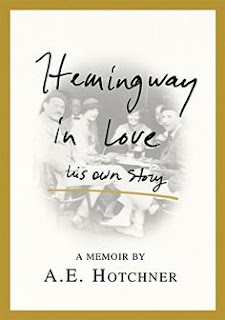 I've spent many hours reading about Hemingway's life since my first initial infatuation. I've read his works and enjoyed them all. I'm still glad my journey into his life began with McLain's novel. The more I read and researched Hemingway and his life, the more I found I genuinely liked the man, even though I didn't want to like him - much less love him. I'm sure I'm not the only woman to feel that way. Hemingway could be a real jerk. He really could be, but all the other things he was made him...very special. I don't know any other way to put it than that. I do know a way, though, that you can understand what I mean.

I just finished reading Hemingway in Love: His Own Story by A.E. Hotchner.  It is a loving memoir of Hemingway with much of his own words. Hotchner and Hemingway were good friends the last thirteen years of Hemingway's life. Hotchner waited until now to publish the memoir out of respect for other people in Hemingway's life that would have preferred that many of the words go unpublished. 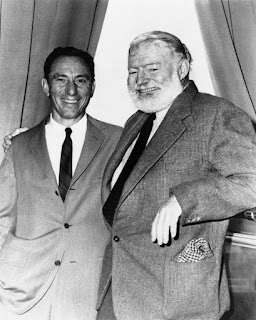 "Before he ended his life, it was important to him that his final words explain the self-inflicted pain of letting the only true love of his life slip away." ~ A.E. Hotchner

The book is a quick read (unless you like to linger over the words, as I do) and not difficult to understand, even if you don't know much about Hemingway. Hotchner has a way of weaving in pieces of Hemingway's life so you understand the whole picture without getting bogged down with too many details. The book is well-written and very touching. You can tell Hotchner loved and admired "Papa" Hemingway. Some people use that as a point of criticism. I disagree. I would prefer someone who loved me to write about me when I'm gone from this earth. "But doesn't that make the storyteller biased?" Absolutely, in all the right ways.

The basis of the book is exactly what that the title says. It's Hemingway's thoughts on who he loved. He wanted certain things known later on in his life - he wanted someone to write it down. He discussed it with Hotchner and wanted him to write it if Hemingway was never able to do it for himself.

There's so much to love in this little book, I don't dare ruin your own journey into it. It is achingly sad in such a sweet and tender way. I loved seeing this side of him from someone who loved and admired him. I enjoyed Hotchner's recollection of moments he shared with Hemingway, along with some personal photos I had not seen before, and it was a pleasure reading Hemingway's own words.

If you love Hemingway, it's a must-read. If you don't know a thing about him, it's still a good read to hear what a man, who was married four times, has to say about being in love. In true Hemingway style, he doesn't usually speak in hearts and flowers. He speaks his mind bluntly, as he looks back over his life, and ponders what was and what might have been.

Posted by bornbibliophile at 6:38 PM