I just finished reading my third Kate Morton novel and, to be quite honest, I'm not quite sure what to say about it - or how to say it best...? This is a reluctant review because it feels strange to not want to overly praise a Morton novel. I've loved her two novels before this one and, given this was her debut novel, I guess I should have expected it might fall a little short of the glory of the other two she wrote at a later date. We should all improve as we go, yes? 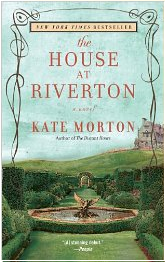 Still, I hesitate to give my opinion which may be...a little skewed. Tell you what, I'll state what I think - plain and simple - and tell you why I fear my perspective may be a little off. You'll have all the facts and can decide for yourself. The House at Riverton, also known as The Shifting Fog, by Kate Morton is a good novel. There's no doubt about that. Is it a great novel? Well,...let me tell you my problem...

I felt a bit impatient (and a little bored) with the first half of the novel and thought it dragged a bit. I believe it's because I'm a fan of the "Downton Abbey" series. You see, so much of what I read was similar to scenes I've seen played out on "Downton Abbey," I found reading the novel a bit tedious - almost like watching a rerun of a show I liked the first time, but didn't find it very interesting the second time. 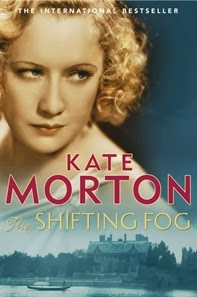 I realize there are many books written about the whole 'upstairs/downstairs' dynamic of England back in the early 1900s. I thought that, perhaps, that was what seemed a little redundant to me. I'm still not quite sure. The core of the story is really great, but it just seemed like it took too long to get there. And I am not, typically, an impatient reader.

To be completely honest, I even looked up to see when the BBC series was created because I felt someone must have copied someone. Now, I'm not accusing anyone of anything, but I will say that Morton's novel was published in 2006 before Julian Fellowes created the BBC series, which was launched in 2010. Again, I'm not accusing anyone of anything, but I had to research it. There was just too much that was bugging me. Fellowes gives credit for his idea for the series from a book he read To Marry an English Lord by Gail MacColl and Carol Wallace.

All of that aside, I can't help but wonder if I'd never seen the BBC series, would I have liked Morton's book better? Would I have had more patience with it and enjoyed learning about the life of a housemaid/lady's maid in England in the 1900s and the secrets she keeps? I certainly think that's possible, even probable.

I have read (and reviewed) Morton's The Forgotten Garden and The Secret Keeper. I loved both of those, but The Forgotten Garden still remains my favorite Morton novel to date. One of the great things about this author is that she weaves a fabulous tale and always, amazingly, ties up all the loose ends - some that you didn't even realize were loose until she ties them. I love to read her writing, love to read her descriptions. I never fail to find delicious quotes and make deep connections with her characters.

I'm looking forward to reading another of her novels The Distant Hours, which my friends tell me is a wonderful read. I already own it, but I'm not going to read it right away. I've decided to sprinkle a few classics in between now and the Christmas holidays, when I have the time, and save The Distant Hours until after the holidays.